I love, love, love what the city of Doraville did this year with the Mayor’s Annual Christmas Tree Lighting.

What a wonderful way to celebrate the diversity of this community and open the eyes of it’s residents, and it’s visitors, to the many cultures and customs of other lands.

It started off with an amazing performance from the Dunwoody High School Choir. They did an excellent job with the accapella Christmas Carols. The Chinese Cultural School of Atlanta yo-yo performers were impressive to say the least. 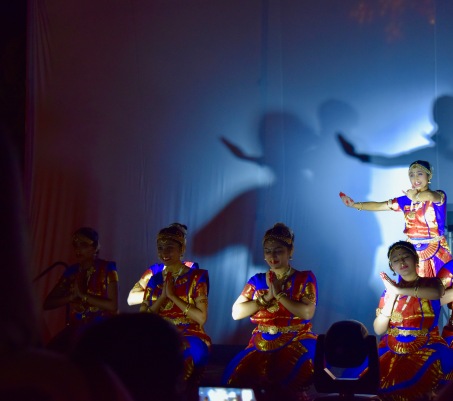 U.S. Marine Corps singers came out and gave it their all. God bless the men and women who are willing to lay down their lives for us.

Mayor Donna Pitman did a great job getting the kids (and adults) excited about the new tree being lit. Which is beautiful. You have to get by and see it in person. Great choice guys. And Donna P. did a great job getting the kids pumped about Santa’s arrival. He got a little upgrade with his ride this year and was riding happily in the passenger seat of a hot rod. Next year Mrs. Clause needs to do the honors of escorting him in. He also came accompanied by  the Panamanian Marching Band who really got the party started.

Once Santa and his helpers got to City Hall, they took their place and got down to business. I believe we were family # 90 something, so that tells you he was up to a busy night.

B.T.W. You know who you are Santa’s little helpers, you did a great job with pictures and getting the kids comfortable with their photo shoots.

We mingled out of doors while we waited for our turn to get pictures.

The light show started while we waited and it was dazzling! The kids had a blast practicing their dance moves.

We were a touch late upon arrival, so we missed the craft making and s’mores on the fire pit. Still we had a great time.

Fact is, D’ville had a night packed with activities, we almost missed getting our pictures done with St. Nicholas.

Making changes and re-vamping can be a scary thing sometimes. Hats off to a hard working team of folks!

You greatly succeeded and knocked it out of the ballpark!!!!

Together Is Our Favorite Place To Be

Together Is Our Favorite Place To Be